From Agency Systems Wiki
Jump to navigation Jump to search

There are a number of different detail levels available, depending on how the data should be organized. For example, the report output can include only a single line for each company, or optionally expanded to include class of business sub-totals for each company.

The report can be completed according to Fiscal Year, or Calendar year.

The sales analysis can be opened by selecting Reports -> Sales Analysis -> by Client, Class, Company or Producer.

Access to the sales analysis is controlled through the security system A/R -> Sales Analysis -> View setting. 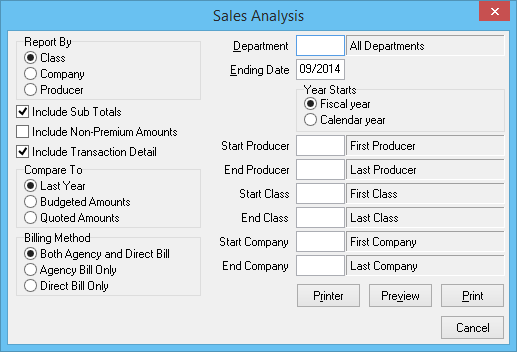 Include Sub Totals and Include Transaction Details

The options control the amount of detail, per primary grouping that is included.

The report has not been designed to tie with any financial reports.

The report only includes invoices and Binders for the specified period and does not include any other type of transaction such as Journals, Cash, or Checks.

Installment Invoices are reported as a lump-sum, while financial reports only report on the installment balance that is effective in the report period.